Rule of 500: How long before you see star trails in an untracked shot? 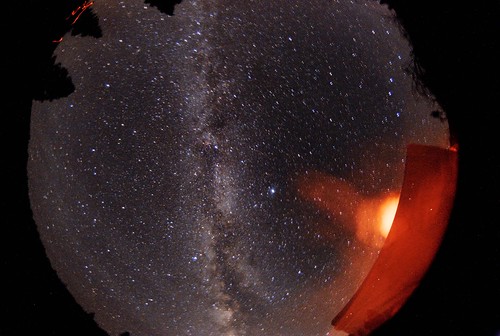 The Rule of 500 was invented to help astrophotographers determine how long an exposure can be before stars appear trailed in the shot. This was especially important for film photography because if there was a problem you wouldn’t know about it until the film was developed! To use the rule, simply take 500 and divide it by the focal length of your lens and, voila, the result is the maximum number of seconds you can leave your shutter open before the stars start to appear elongated.

Unfortunately, the equation is no longer a very useful one because pixels nowadays are actually smaller than the silver grains in film, so star trails appear sooner (you are resolving them better). On your modern DSLR, using the rule of 500 will almost certainly result in visible trails.

It’s also useful to note that it depends on where in the sky you are imaging. Stars closer to the celestial pole (North Star) will not trail as quickly as stars close to the celestial equator. The equation below assumes the worst (imaging near the celestial equator), so if you are pointed in a different direction, you may be able to get away with a slightly longer exposure. You will also need to decide how long the trails can be before you deem them objectionable.

You can use the equation below as a starting place for your shutter speed setting. Take a test frame and zoom in on the stars to get an idea of how elongated your stars are. If there is too much trailing, simply shorten your next exposure. Don’t see any trailing? Maybe you can get away with a slightly longer exposure!

Example:
Lens: 14mm
Camera: Nikon D810 with 4.9 micron pixels
Tolerance: 5 pixels
With this combo, you can shoot for up to 24 seconds before the stars near the celestial equator have moved 5 pixels.
Note: Can’t remember the equation? No problem! The rule of 500 provides a good starting place. You can always shorten the exposures if you see trails!!!