The Celestron C9.25 EdgeHD OTA is unique among Celestron's EdgeHD models with a slightly slower primary mirror compared to the other SCT telescopes produced.  Like the other EdgeHD models, a full aperture corrector plate and 3-element corrector  lens group in the baffle tube make the C9.25HD is a fully aplanatic SCT design.  The C9.25HD features an optimized back-focus of 146mm and native focal ratio of about f/9.9.  The field is flat with an image circle approximately 42mm in diameter.

Attaching the Lepus-HD C9.25 Edition telecompressor to the back of the OTA will yield an approximate f/6.4 light cone at the recommended on-axis back-focus distance of 96mm. The effective field of view is reduced to 28mm with some light loss beyond about 24mm which is correctable with good flat-fielding techniques.  Because the C9.25HD corrector lens group is mounted very close to the end of the baffle tube at the exit port (see diagram), the Lepus-HD C9.25 Edition includes a 5mm thick aluminum spacer to ensure the corrector lenses and telecompressor lens do not make physical contact.

Ronny Kaplanian of Australia spent several weeks perfecting the back-focus distance between his Celestron EdgeHD C9.25 and Lepus telecompressor. We found that the optimal distance on-axis is about 4mm shorter for the C9.25HD compared to the original design back-focus of 100mm.  The diagram at bottom shows the recommended back-focus distance of 96mm or 101mm as measured from the flange.   Ronny's results below speak for themselves. 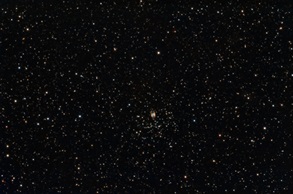 The NGC2818 image at left was provided by Ronny Kaplanian and taken with his Celestron C9.25 EdgeHD, Lepus-HD C9.25 Edition telecompressor, and his Starlight Xpress SXVR-M25C camera in a monochrome mode with separate RBG filtered images.   The image sensor on the SXVR-M25C measures 23.5mm x 15mm for a diagonal measurement of nearly 28mm.  The image was combined and further processed by Terry Hancock with only slight cropping to remove the stacking artifacts.

Camera-Specific Mounts for the Lepus Telecompressor 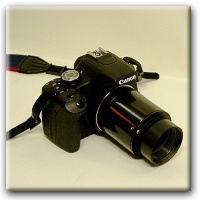 The Lepus telecompressor has a design back-focus distance of 100mm on-axis. Each of the camera mounting plates below are designed to maintain that back-focus for the best overall image quality and a reduction of 0.62X. Varying the back-focus distance will alter the magnification (reduction) but may introduce undesirable optical aberrations as well. We recommend using the Lepus telecompressor only with the recommended camera-specific mount.

Each camera mount consists of a 2.1" ID tube of various lengths and a mechanical interface such as a T-thread, C-mount, or STL thread. This ID tube fits over the camera side of the Lepus telecompressor, which features the OPTEC-2100 male circular dovetail mount. The camera mount is held securely to the Lepus dovetail using three oval point setscrews located 120 degrees apart. 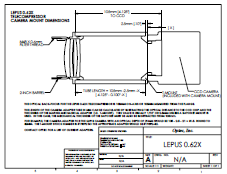 It is important that the overall back-focus distance be set as closely as possible to the design distance of 100mm on-axis. Measured from the flange at the bottom of the OPTEC-2100 dovetail, the distance works out to 105mm as shown in the PDF at left.

Most of the mechanical camera interfaces require an additional 1/10th inch or 2.5mm of back-focus. The camera backfocus distance, BF, should be known to within about 1mm for best performance and should include the thickness of any filter wheel, off-axis guider or other adapter between the Lepus and camera sensor. Use the table below to find the appropriate mounting plate for many commercially available cameras and configurations. If your camera is not listed below and you know the optical back-focus, BF, and mechanical interface (i.e. T-thread) you can determine the stock number as with the following calculation: